McClancy’s rich athletic tradition prompted the Alumni and Athletic Departments to start the McClancy Hall of Fame in 1996. These men have distinguished themselves on the fields of competition during their four years as McClancy students, have coached teams that have excelled or have dedicated a major portion of their lives to McClancy athletics.

Mail in your nomination. 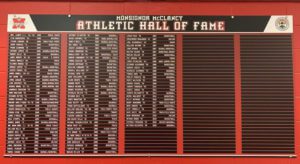 With a tremendous amount of pride and gratitude, we list the members of the McClancy Athletic Hall of Fame.