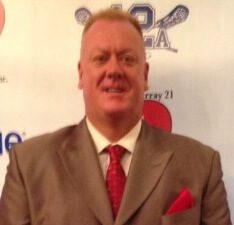 Billy is a proud Queens native.  Billy was born in St. Albans Naval Hospital during his father’s service in Vietnam.  Billy was raised and lives in Howard Beach, Queens, the first child and only son of Buddy and Carolyn Hofmann. He and his two younger sisters, Nancy Crocker and Lynn Lynch all attended Our Lady of Grace Grammar School, where Billy played CYO basketball, baseball, and was a member of the swim team.   The swim team was coached by his father, and won a 1976 CYO Diocesan Championship. Billy entered Msgr. McClancy Memorial High School in 1980, and focused his athletic energies on basketball, having the great fortune to play half his high school career under McClancy’s legendary coach Don Kent.  Billy was a member of Coach Kent’s Final Four Cinderella team in 1983, beating three power house teams Molloy 70-69, Rice 82-67 and Tolentine 70-67 along the way.

Under Coach Kent’s direction, Billy played his best games during his senior year as the starting center. He set the CHSAA playoff rebounding record with 21 rebounds vs. Xavier High School was picked to play in the Senior Classic Brooklyn/Queens vs. Bronx/Manhattan game at Mount St. Michael’s.  Billy was offered a four year athletic scholarship to play basketball at St. John Fisher College for the late Hall of Fame Coach Bobby Wanzer.  After his freshman year, Billy transferred to Dominican College, continuing to play Division II basketball with an athletic scholarship. Billy graduated in 1989 with a Bachelor of Science Degree in Marketing Management.

Billy spent a short time on Wall Street before moving into sales and development in the beer industry. Billy has pursued a number of opportunities in sales and management within the beer business, and is proud to serve as Metro New York Regional Sales Manager for Long Trail & Otter Creek Breweries selling the finest craft beers from Vermont.

Billy’s love of basketball and his commitment to service have continued throughout his adult life.  Billy has served as a coach for CYO and AAU basketball teams and is a certified IAABO referee (Board 119 Referee Association). He enjoys the new view of the game that refereeing provides.  Billy is a fourth degree Knight of Columbus and member of Council 2672 in Rockaway Beach.

Billy lives in Howard Beach with his wonderful wife Susan, and his incredible son Chris, law student at St. John’s University, and their two furry canines, Murphy and Buster.