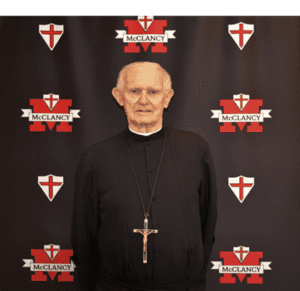 Brother Robert Connolly, a product of St. Rose of Lima Parish in Brooklyn entered the Brothers in 1945. He pronounced his first vows in 1950 and began his teaching career three years later at St. Philip Neri Grammar School in the Bronx. Brother spent two years teaching in New Orleans, six more at the training school for young Brothers-to-be in Metuchen and in 1962 was assigned to Monsignor McClancy.

His first year at the school saw him as a full-time teacher, confraternity moderator and athletic director. He was appointed assistant principal the next year, and one year later, in 1964, he was named principal.

Brother Robert served in that position until 1972, when he was placed in charge of the young Brothers’ spiritual formation as novice master. Subsequently, he was elected Provincial of the New York Province, serving the maximum of two terms. Brother was then assigned to St. Joseph’s High School in New Jersey where he was a full-time teacher, athletic director, coach of both baseball and basketball and for two years, treasurer. He returned to McClancy in 1985 and has been here ever since, except for a short stint back at St. Joseph’s in the early 90’s.

He was appointed the first President of McClancy in 1997, serving in that position for six and a half years, until January of 2004, when he was relieved of that position by Brother Joseph Rocco. Brother Robert was the financial director, and math teacher at McClancy until around 2017. At that time his duties were limited to part time responsibilities within the school.

Brother Robert has served the McClancy community for over 48 years and is still going.