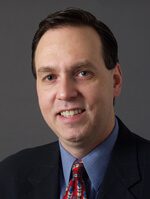 Steve Squeri graduated from Monsignor McClancy Memorial High School in 1977. While at McClancy, he was a member of the National Honor Society, the Spanish National Honor Society and the Basketball Team. Upon graduation, Steve attended Manhattan College where he earned his B.S. degree in Accounting and Computer Science, as well as an M.B.A. in Finance.

As a member of the American Express Executive Leadership Team, Steve functions in two distinct roles. He serves as Chief Information Officer with responsibility for leading the Global Technology Team. He also serves as Executive Vice President of Corporate Development, overseeing mergers and acquisitions for the company.

Steve joined American Express in 1985 and has held positions of increasing responsibility, including President of Establishment Services North America and President of Global Commercial Card. Before joining American Express, Steve spent four years as a management consultant at Arthur Andersen and Company.

In addition to his corporate role, Steve is an active supporter in the local community. He remains involved at Monsignor McClancy, serving as a member of the Board of Governors. He also serves as a member of the Manhattan College School of Business Advisory Council, New York Downtown Hospital Board of Trustees, Harlem Children’s Zone Board of Trustees, Raycliff Acquisition Corporation Board of Directors and chairperson of the Valerie Fund Golf Tournament. His support of local nonprofits and business organizations focuses on fundraising and leadership development.

Steve and his wife, Ann, live in New Jersey with their two daughters, Marissa and Monica.