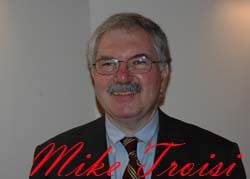 Michael Troisi is a graduate of the class of 1963. Mike grew up in Jackson Heights and graduated from St. Joan of Arc School prior to attending McClancy. After graduation, he attended Boston College and graduated from the Fordham University School of Business Administration in 1968. After active duty in the National Guard, he entered St. Johns University School of Law, from which he graduated in 1972. He was admitted to the New York State Bar in 1973.

Since 1977 Mike has been associated with the law firm now known as Allen, Morris, Troisi & Simon LLP which specializes in real estate matters with a concentration in apartment buildings and cooperative and condominium conversions. He is also the operating officer and a principal of Yankee Management Company Inc., a private real estate company operating multi-family housing.

Mike has been married since 1979 to his wife Louise, who is a school teacher. They have two sons Andrew, 25, a Deputy Press Secretary for the New York City Office of Emergency Management and Peter, 22, who works in alternative investments at Bear Stearns. They live in the Bay Ridge section of Brooklyn.

Mike became reconnected with McClancy in the planning for Reunion 2000. Since that time he has served on the Development Council and the Board of Governors and for the past four years has been the chairman of the President’s Dinner committee. Prior to that Mike was active for many years in coaching, officiating and in the administration of the soccer and baseball programs in St. Anselm’s parish where he is a parishioner.