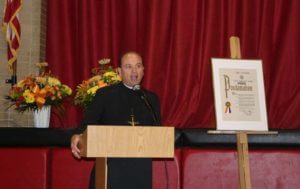 A resident of Astoria, Queens, Brother Joseph Rocco attended Immaculate Conception Grammar School. After graduating in 1962, he enrolled at Msgr. McClancy H.S. He graduated from McClancy in 1966 and attended Hunter College where he earned his B.A. degree in Spanish/Italian in 1971. In the meantime, he had entered the Brothers of the Sacred Heart community.

Brother earned an M.A. degree from the University of Notre Dame in Modem Foreign Languages (1974), pursued international studies in Mexico, attained his New York State professional certificate in school administration and supervision (1981), and is presently in the doctoral studies program through the Graduate Theological Foundation of Indiana and Oxford. England.

Besides being a graduate of Msgr. McClancy Memorial High School, Brother Joseph served as teacher from 1970 to 1973; as assistant principal from 1979 to 198-4; and as principal from 1984 to 1997. This totals twenty-five years that he was directly associated with McClancy either as student, teacher, or administrator.

On the professional level, Brother Joseph has researched and presented professional and spirituality days for various high school faculties in the New York and New Jersey areas; he has been a member of numerous educational and professional organizations; served on the Institute’s Ad hoc Committee on Finances (Rome, 2001), and is presently serving as an adviser to the National Bishops Committee on the Liturgy.

Recently, Brother Joseph returned to Monsignor McClancy Memorial High School to become the school’s second President. In 2004, Brother Joseph received his Doctorate in Education from the University of Notre Dame.