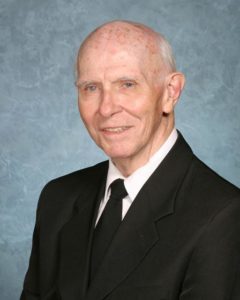 Brother James O’Grady, S.C., a product of St. Luke’s in the Bronx, has been involved in the ministry of teaching for fifty years in Louisiana, Mississippi, New Jersey and New York. During this time, he has served as Athletic Director, Moderator and coached in the areas of football, basketball, baseball, bowling and tennis. He was President of the New Jersey Track Conference for three years and also served as the Brooklyn Queens Principals’ representative to the New York State Catholic Athletic Association for five years. He has served as the President of the Principal’s Association for two years. Brother James has been a member of the Provincial Council of the Brothers of the Sacred Heart numerous times during his time in the Saint Joseph’s Province.

Brother James served as Assistant Principal at McClancy from 1964 to 1965 and filled the same position at Saint Joseph’s, the Brother’s school in Metuchen, N.J. from 1966 to 1972. All told, Brother James has served the McClancy community for 14 years.

During the early 60’s, Brother James was responsible for introducing bowling, tennis and swimming into the Msgr. McClancy athletic program. During his tenure as principal, the school received accreditation from the Middle States’ Association of Schools and Colleges. He also instituted a reading and math program to aid students in their learning. Brother James hired the first faculty member here at McClancy back in 1981. While ministering as Principal at McClancy from 1979-1984, he supported the athletic program in all its phases and hired the first layman as Athletic Director.

For nine years, Brother James was Director of Special Projects for the Franciscan Sisters of the Poor Foundation. During this time, he returned to his boyhood parish of Saint Luke’s to raise money for the school’s annual appeal to help defray the cost of students’ tuitions, a cause which he continues to help to this day.  He returned to McClancy in 1997 and is presently the Director of Advancement in the Office of Advancement. In 1998, Brother was elected to the school’s Athletic Hall of Fame.