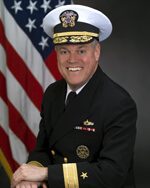 Rear Admiral John Terence Blake was born and raised in New York City. He graduated from Monsignor McClancy Memorial High School in 1971. While attending McClancy High School he lettered in Track, was elected to the Student Government, served on the Student Activities Committee, and was President of the National Honor Society school chapter his senior year.

Rear Admiral Blake commanded the destroyer USS O’BRIEN (DD 975), served on the SEVENTH Fleet Staff in the western Pacific as Current Operations and Assistant Chief of Staff for Operations, and as Commanding Officer, USS NORMANDY (CG 60).

Rear Admiral Blake is currently assigned to the Joint Chiefs of Staff in the Pentagon, where he is the Deputy Director for Resources and Acquisition, J-8.

Rear Admiral Blake is married to the former Nan Marie Connelly of Crofton Maryland. They have three children; Tara (a Junior at the University of Maryland), Erin (a Freshman at Pennsylvania State University) and J.T. (a Junior at Arundel High School). Outside activities include Assistant Scout Master for Troop 115 of the Boy Scouts of America at the local church and sporting activities of any kind.