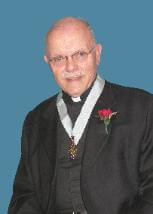 Monsignor Boccio was ordained a priest by the late Bishop McEntegart on June 3, 1961 and said his first Solemn Mass on June 10, 1961 at St. Rita’s in Brooklyn. After ordination, Monsignor Boccio was assigned to the following parishes: Our Lady of Mount Carmel, St. Frances Cabrini, Our Lady of the Blessed Sacrament, St. John the Evangelist and St. Joan of Arc. Monsignor also served as Chaplain aboard a passenger ship for a brief period and as Chaplain at a Veterans Hospital in the Bronx.

Monsignor Boccio was assigned to Immaculate Conception on March 18, 1986 by Bishop Mugavero and installed as Pastor on April 20, 1986. He was raised to Prelate of Honor with the title of Monsignor on December 3, 1989.

Monsignor is an avid supporter of various Catholic Education programs with the Diocese of Brooklyn which included P.R.O.S.P.E.R ( a program for mentally challenged and learning disabled children) and Futures in Education (a program to assure Catholic Education in the Brooklyn Diocese). He is an outspoken and active advocate of the “Right to Life” movement by his continuous participation in the Saturday morning prayers vigils, which he sometimes conducted in the absence of Bishop Daily. Monsignor is Moderator of the Holy Name/Rosary Society, Social and Cultural Group and our Lady’s Pre-School. He conducts the Adult Religious Education classes in our parish which prepare adults to receive the Sacraments of Baptism, Communion and/or Confirmation. Aside from his regular duties, Monsignor takes time out to visit sick and homebound parishioners at various hospitals and nursing homes.