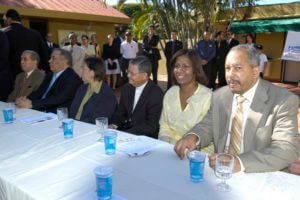 Hector Hipolito Algarroba was born in the Dominican Republic and immigrated to the United States at the age of ten.  He has been married to Annmarie (Sweeney) Algarroba for 25 yea=rs and has a son, Steven, who graduated from Msgr. McClancy in 2004 and is currently attending C.W. Post.  Hector has been a member of the Metal Trades Union, Local 638 for the last 25 years.  He is the President and founder of the HHS Foundation as well as a Disaster Planning and Response Reserve for the American Red Cross.

Hector began his philanthropic work by establishing the HHS Foundation in 1998.  The  HHS represents three generations of Algarroba men: Hipolito, Hector & Steven.  The HHS Foundation began as a response to the needs of underprivileged children in the Dominican Republic.  Hector started small, collecting duffel bags of used sporting equipment and shipping them to the Dominican Republic. Through the generosity of various baseball organizations in the tri-state area, the response has grown to the point that industrial shipping containers are needed to carry tons of donations to those in need.

Recognizing that the needs of these children extended beyond sports, the HHS Foundation responded with medical support. The foundation has been responsible for the vaccination of thousands of impoverished men, women and children and the distribution of over 1,000 wheelchairs. It also assists people in finding proper medical attention with local practitioners and hospitals. The HHS Foundation, in collaboration with the Los Angles Dodgers organization based in the Dominican Republic, has sponsored clinics on the destructive aspects of steroids and other illegal body enhancers.  Also, through the support of the New York City Mayorâ€™s office, the HHS Foundation was able to donate two sanitation vehicles to the province of Bani in the Dominican Republic.