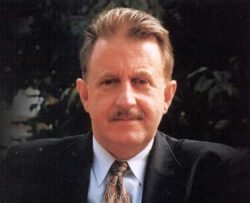 Denis Mulcahy, the founder of Project Children, doesn’t use the power of personality or the force of rhetoric to inspire others to join his cause. Denis Mulcahy leads by example. He takes no salary from Project Children and works long hours tending to the big plans and small details of running the organization. For more than twenty-five years, he has quietly masterminded summer vacations in America for more than 14,000 children from the north of Ireland.

He has given those children – Protestants and Catholics – a much-needed break from the grim politics of their own country and an extraordinary chance to play together. He hasn’t done it alone, and he will be the first to tell you. In fact, if you try to praise Denis, he will quickly start praising Project Children host families, area coordinators, fund-raising volunteers, and benefactors. Denis considers himself simply one of the many. But Denis is truly the heart and soul of Project Children. He started it in 1975, along with his brother Pat. They both had grown up in County Cork, Ireland, and immigrated to New York, where they joined the New York Police Department. Denis has since retired from the force; he was a bomb squad detective. Pat retired early because of injury and returned to County Cork.

In 1975, the north of Ireland was a boiling pot of political violence. Armed soldiers, rolling tanks, and surveillance cameras were everywhere, trying to keep the lid on. People were dying and children were growing up scared. Protestant and Catholic families were insulating themselves against each other -fleeing integrated neighborhoods in search of segregated enclaves. Denis and Pat were heartsick. They decided to do something to help the children. That summer they brought six kids from the north of Ireland – three Protestants and three Catholics – to Greenwood Lake, New York, where they lived. The idea was twofold. Most importantly, they wanted to get the kids away from the violence and the paramilitaries who work double time recruiting kids during school breaks. Denis and Pat also wanted to show the Protestant and Catholic kids that they could live together and actually like each other.

Their plan worked very well. One of the Catholic boys became great friends with one of the Protestants. Years later, when the Catholic boy got married, the Protestant boy was at his side as his best man. Then the Protestant boy got married, and the Catholic boy boy was at his side, returning the favor. Project Children has grown a lot from the initial six kids and the $1600 budget it took to bring them over. Now, each year, Project Children brings over more than 600 kids and places them with host families in more than twenty states. The budget is close to a million dollars. None of it goes to salaries. The headquarters is Denis’ home, which is completely overrun with Project Children paraphernalia (papers, freebies for the kids, donations for fundraisers…) and noises (faxes, ringing phones, knocks at the door, meetings…). Luckily, his wife Miriam is equally dedicated to Project Children.

Denis could not have known in 1975 just how strong and how sweeping Project Children’s influence would be. Denis has been recognized by President Bill Clinton. He’s been nominated for the Nobel Peace Prize – twice. He’s been honored at gatherings across America and Ireland. But all that praise doesn’t swell Denis’ head, he still pitches in wherever he’s needed. When a young Belfast girl’s luggage was put on the wrong plane in New York, it was Denis who tracked it down in Dublin.