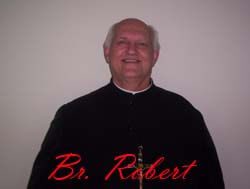 Brother Robert received his bachelors degree in education from Spring Hill College. He also holds a Master degree from Notre Dame University and a Master Degree from Fordham University. He also completed course work at Lehigh University and St. John’s University where he took courses in the field of Educational Psychology.

Brother Robert has been a high school teacher for twenty years. At Msgr. McClancy High School, St. Joseph’s High School and Phillipsburg Catholic High School he taught Religion, French, English, Sociology and Psychology. He also ministered in those high schools as guidance counselor, student council moderator, Mother’s Club moderator and Dean of Freshmen. As the Handball Coach at McClancy, he was named Coach of the Year by the Catholic High School Athletic Association. In the province, he was vocation director for over twenty years and served as the volunteer coordinator and recruiter for five years.

During the last ten years, Brother Robert has served as the Director of Religious Education at several parishes. They include St. Francis Cathedral in Metuchen, Regina Pacis in Brooklyn and St. David the King, in West Windsor, New Jersey where he is presently ministering.